This is the fee range based on tournaments I played in in 2012 to date(assuming FIDE 2000). Budapest has some true bargains to offer. See the Hungarian Chess Federation for a complete event listing

1 Game/Day Round Robins
Expect to play in the 15-20EUR range for this type of event. Notice that First Saturday is priced far above the normal range as the foreign tourist is the target market. Once familiar with the local rates, there is no need for anyone to be paying 8-10X the market rate for no prizes,

Note Hungarian players get a much lower price than foreign players(12,000HUF) but this is still high compared to other similar events. This is an unadvertised discount price. Be aware that all FS entry fees are negotiable(not generally known). 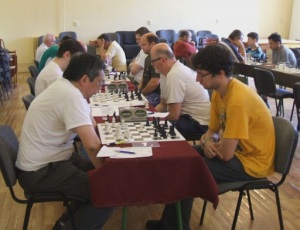 Yip(left) playing Kormos,Adam at the Frech Karoly RR 2013. Background on the right is the Open event. Photo by Zoldy Robert(organizer)

1 Game/Day Open
I highly recommend the tourist friendly Budapest Open which usually has two other RRs running beside the open. These are  for GM-norm and IM-norm candidates.

>1 Game/Day Opens
These events are the real bargains, but are restricted to FIDE <2200 players and are played at G/90mins. The Rakosmente Open(s) are held at my club so I receive a team discount. The rate of play takes a bit of getting used to but the the low prices are the main lure.

The Lila Futo Open(s) are on the Buda side of the city but still use ancient mechanical clocks which often do not run properly. All the other events use digital clocks.