Black is pressing the kingside with the g-file and with Bb7 but for now the threats to g2 have been stopped by 21.Nd4. How should black continue?

Most of the results have already been reported. The French Women’s TCh had the most recent action with Anita Gara, Anna Rudolf and Ildiko Madl playing.

Each of the 12 teams consists of maximum eight team members. According to the average ELO of the first five players,

Here is an important game from rd5

Critical Position
Black’s kingside is loose. How should white proceed?

Critical Position
Black’s king is shelterig behind the kingside pawns. How does white make progress?

Here is a game of WGM Gara,T(HUN) in UNAM Open recently completed held in Mexico.

Critical Position 1
White has a slight lead in development. But what is next? This is a test of understanding and choosing the right plan.

Critical Position 2
The ending is in full swing and it is black who is pressing with a slight advantage. The e5 pawn is under attack so how should black react?
-Guard the pawn with …f6
-Trade knights with …Nxd3
-There is a little hidden tactical shot
-Something else 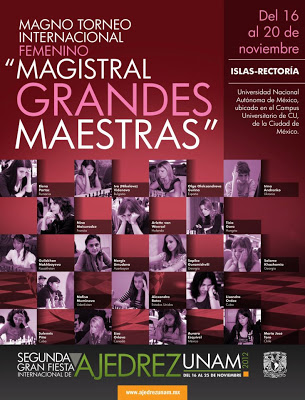