More Bratto Chess
The feature game was won by Hungarian GM Csaba Horvath and was played in Bratto as part of the Italian TCh.

Position 1
Black has a P+ and in the process of consolidating the advantage. What do you recommend for black?

TWIC 964
GM Almasi took clear first in the recent Capablanca Memorial. In round 4 he won with a nice attack using the ever popular English Attack against the Sicilian Kan.

Here is the feature game.

White has a nice attack going. The g,h files have been cleared; white’s queenside is secure from counterattack and Ba6 is just a spectator. What do you recommend for white now?
White to Play

Position 1
White has pressure over the whole board after some original play. The Na5 binds the queenside while the bishop pair menace the kingside. What do you recommend for white now?
White to Play

Hungarian Women’s Champion WGM Papp,Petra scored 5.5/9 at the Cappelle la Grande Open. In round 8, she ground down Barlov in a tough RBB-RNN ending.

Position 1
White is a pawn up but the passed a-pawn is firmly blockaded. What do you recommend for white?

Youtube BeautyandChess BeautyandChessGeek
The first official chess video is Harikrishna-Van Wely from Tata Steel A 2013 in a smashing Sicilian win for white.

Alvarez has a real talent for communcating, in this fine initial video series.

‘Hello! GM Alejandro Tadeo Ramirez Alvarez (Chess Geek) and WCM Yelizaveta (Beauty) here! This is a Youtube channel about chess. We will be making videos about some of the recent chess tournaments going on, analyzing games, openings, and players!

Sometimes we will be together for the videos, but most of times will be seperately! Yelizaveta currently lives in Canada, while Alejandro lives in USA.’
Part 1

Position 1
The ending is tense. How should black proceed?

Position 2
Deep into the ending black has a dangerous looking passed pawn well supported by the rook from behind. What should white do?

GM Hansen,E won his first game in the Dutch League.

Position 1
The position is sharp with mutual attacks underway after white played 32.a4.
Q1 How do you assess the position

Q2 What should black play now?

Here is my first round game which made my opponent very happy.

The moral of the game is players win games not ratings!

Critical Position 1
Black has just reinforced the kingside with 13..Be7. What is the plan for white now?

Critical Position 2
Black thinks that after the queen moves there will be an attack on the g-file and compensation for the pawn.

Here is an important game from rd5

Critical Position
Black’s kingside is loose. How should white proceed?

Critical Position
Black’s king is shelterig behind the kingside pawns. How does white make progress?

Here is a recent win over a tough opponent in the ladies Bundesliga. 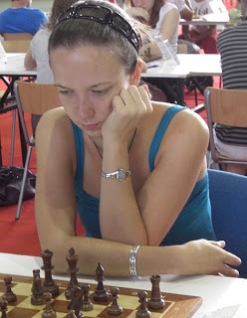 Critcial Position 1
Black has a compromised pawn structure on the queenside while white’s structure remains clean. What should black’s plan be? How do you play?

Critcial Position 2
Deep into the endgame black has an extra pawn. White however is resisting and has a passed c-pawn and a supported Nd6 deep in black’s territory. Converting the extra is not so straightforward. How should black play?