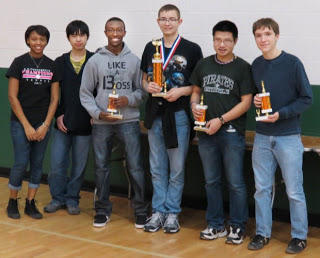 Brett Cole was awarded a medal for his three wins in four rounds on Board 4. Other players contributing to the success of the day were Ethan O’Dell, Nick Huber and Christine Gardner. Sorsen and Haake both finished with a perfect four wins in four games.

The team is coached by Janet Baldwin.’ 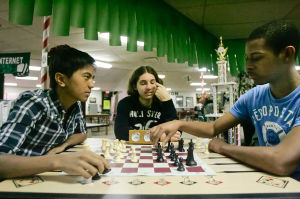 Dietz ruled that when the Legislature cut funding for Texas schools by $5.4 billion in the 2010 biennium and at the same time raised academic standards it violated the Texas Constitution.

Two-thirds of the school districts in Texas sued to overturn the state’s system of financing public education. When final arguments concluded, Dietz announced his decision from the bench, upholding all major claims by the school districts. The decision will be appealed to the Texas Supreme Court.

In a prelude to the ruling Dietz recounted the story of how competitive chess caught on like wildfire in the early 1990s in Brownsville and how JJ Guajardo’s chess teams at Russell Elementary won seven straight state chess championships. Brownsville went on to become a national chess powerhouse.

Guajardo, now the coordinator for social studies programs in the Mission Consolidated Independent School District, said he discovered the powerful influence chess could have almost by accident.

“These were just sixth graders, good kids, but here in the Valley they do come with baggage, hindrances,” Guajardo said. “They also come with a lot of good points. There were two boys, Fernando Zamora, who went on to graduate from Harvard, and Andy Zamora, who was brilliant but very hyperactive and tended to get into difficulties. He was just really bored.

“One day Fernando challenged me to a game of chess. I always had a chess board in my room, and I fancied myself a decent chess player, but Fernando beat me. But Andy, just by watching the game, picked things up — and Andy just became consumed with the game. Other kids began getting involved.”
Before long Guajardo was organizing chess tournaments and taking teams to state championships.

“These were just mischievous sixth graders, not gang bangers or anything like that, good kids,” Guajardo said. “Mrs. Ayala (the assistant principal, Rachel Ayala) was very supportive of us. She found us funds and gave us permission to go to the state championships. The key to success is parental support. … What an amazing chess nursery that was and my kids showed no mercy (in tournaments).”

Next month will be the 20th anniversary of Russell winning the first of what would be seven straight state chess championships. Before long, all of Brownsville was involved, including private schools.

“The competition just grew citywide. It caught fire. It was a phenomenon thing that you would not expect to happen where 80 or 90 percent of the kids start school not knowing English.”

Dietz only became aware of chess in Brownsville, Harlingen and the Rio Grande Valley after a bilingual teacher from Sam Houston Elementary in Harlingen testified at the school finance trial and he then Googled the matter.

“This story is a perfect illustration of what I call the miracle of education,” Dietz wrote in remarks prepared for delivery at the trial’s conclusion. (more)