Washington U Chess Club at Pan Am Ch 2012

Division II Champions Studlife Division-ii-championship
‘Harvard? Cornell? Neither Ivy League institution put up much of a fight against the Washington University Chess Club in its most recent major tournament. 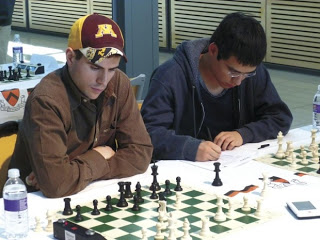 In its fourth year of existence and third year competing, the University’s ‘A’ team captured the Division II championship title for its best ever finish at the Pan-American Intercollegiate Chess Championships, held in Princeton, N.J. from Dec. 27-30. The victory earned the chess club a trophy and $125 in prize money.

In addition to the team title, sophomore Mark Heimann finished as the second most successful player in the tournament with four wins and a draw in six matches.

“The competition was quite stiff, but I think that was true for all of us,” Heimann said. “A number of the teams we faced had internationally titled players even on their lower boards. I am pleased with my individual result and am definitely glad to turn out a solid performance, but I’m more excited about the strong performances of my other teammates that led to us netting the Division II prize.”

The tournament was seeded by assigning each player on each team an overall rating; teams with the highest overall ratings compete in Division I. Wash. U.’s ‘A’ team held a rating of 2,181, just 19 points below the Division I cut-off of 2,200.

The Division I championship ended in a five-way split for first, with the University of Texas-Dallas ‘A’ team receiving top honors after a tie-breaker.

In the tournament, each team plays six matches against various other teams, followed by four players facing each other head-to-head. A win is awarded one point, a draw is given half of a point and no points are awarded for a loss. The team that totals the most points in the matchups is given one point in the overall competition. The team with the most overall points wins the championship.

A final-round sweep of Harvard sent the Washington University team back to St. Louis with the trophy and check.(more)’

Here is a nice attacking game by GM Boros(HUN) from the PAN-AM Intercollegiate Championships.

Position 1
The plan is clearly to attack but how?