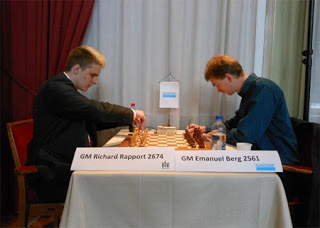 ‘Richard Rapport won the 21st Sigeman & Co tournament in Malmö, Sweden on Tuesday. The 17-year-old Hungarian grandmaster tied for first place with Nils Grandelius and Nigel Short, but won on tiebreak: direct encounter (the results of the players in the same point group).

More on the Sigeman 2012 Tournament
Some background(Swedish language)


TWIC 968
GM Rapport kept the queens on for the maximum tension playing the white side of a g3 Nimzo-Indian. He was finally rewarded for persistence in the sharp QR-QR phase when GM Short loosened his king’s position and allowed a devastating attack.

Position 1
White has a strong attack going. What do you recommend for white now?
White to Play

More on Sweden
The Siegman tournament is being held in Malmo. Here’s some background on the Swedish city.

TWIC 968
GM Rapport played a thematic game against the French and won a sharp ending. Of note was the nice Ra2-d2!? way of bringing the rook into play in the opening.

Position 1
White is winning but what is the most precise way to end the game?
White to Play