Here is a model game on weak dark square play from the recent Istanbul Olympiad. The 3.e4 line is Schandorff’s repertoire recommendation in Playing 1.d4 The Queen’s Gambit(Quality Chess 2012).

In December 2008 Wojtaszek became the European rapid chess champion.[6] In 2009 Wojtaszek finished second in the Polish championship, shared second with Michael Roiz at the international tournament in Lublin and won the Najdorf memorial played in Warsaw. In 2009/10 he tied for 1st-5th with Eduardas Rozentalis, Pavel Ponkratov, Luke McShane and Igor Lysyj at the 39th Rilton Cup in Stockholm.[7]

In January 2010 Wojtaszek finished again second in Polish championship. Wojtaszek won the 5th International Tournament of Polonia Wrocław played between the end of June and beginning of July 2010.[8][9] He participated in the San Juan International tournament played in Pamplona during the end of July and beginning of August 2010 and scored 6.5 points out of 9 games winning the tournament.[10][11]

At the Chess Olympiad in Khanty Mansiysk, Wojtaszek played on the first board for Poland scoring 6 points in 9 games. In June 2011 he won the 9th Gyorgy Marx Memorial in Paks, Hungary.[12]
He has been one of the four seconds to world chess champion Vishwanathan Anand since his successful title defence match againstVladimir Kramnik in October 2008,[13] also assisting him in defending his title in April–May 2010[14] against Veselin Topalov and in May 2012 against Boris Gelfand.[15][16]-‘Wikipedia Wojtaszek R

Position 1
The kingside attack is well under way. How should white continue the attack? 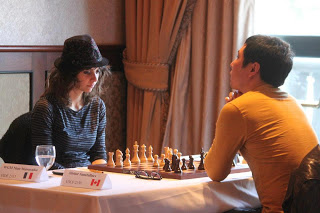 The main event is a 6 round FIDE and CFC rated Swiss with $5000 in prizes.   There are also a number of side events which are free if you play in the main event and include an active tournament, Midnight Blitz with $100 in prizes, and a Bughouse tournament to finish off the weekend.