TWIC 970
Peczely reached a good position in a RRB-RRN ending but made some small inaccuracies which turned the ending to white’s favor.

A key position in a RR-RR ending has arisen. What do you recommend for white?

Born in Budapest, he burst onto the international chess scene in 1935, at the age of 18, winning the first of Hungarian Championships, an international tournament in Tatatóváros, and was selected to represent his country at the 1935 Warsaw Olympiad.

Onlookers at the Olympiad marvelled at the youngster’s flair for attacking chess, a style that ran contrary to the dour, positional approach adopted by his countrymen. It is thought that the young Szabó studied under the tutelage of Géza Maróczy, then a patriarchal figure in Hungarian chess, having previously trained future world champions, Max Euwe and Vera Menchik.

Prior to World War II, there were other successes, including outright victory at Hastings 1938/39 (a tournament he was to hold a long association with). He began a career as a banker, dealing in Foreign Exchange.

Then, at the outbreak of war, was attached to a Forced Labour Unit and later captured by Russian troops who held him as a Prisoner of War. After the war, he returned to chess and played many major international events.

He finished fifth at Groningen 1946, an extremely strong tournament which included Botvinnik, Euwe, Smyslov, Najdorf, Boleslavsky and Kotov. At the Saltsjöbaden Interzonal of 1948, he finished second to Bronstein and took outright first place at Hastings 1947/48, Budapest 1948 and Hastings 1949/50.

A share of fifth place at both the Saltsjöbaden 1952 Interzonal and the Gothenburg Interzonal of 1955, meant that each of his Interzonal finishes had been strong enough to merit him a place in the corresponding Candidates Tournament.

It was at his third and final Candidates, held in Amsterdam in 1956, that Szabó made his most promising bid for a World Championship title challenge. He tied for third place with Bronstein, Geller, Petrosian and Spassky, behind Smyslov and Keres.

Szabó was the best player in Hungary for nearly 20 years (eventually being succeeded by Lajos Portisch around 1963/64) and at the peak of his powers, one of the top 12 players in the world.

Rd4
Today was a brutal day. I played three rather inconsistent games and won all of them to take clear first with 4/4, with 2 games to play tomorrow.

The last game of the day was a comedy of errors and in the end I was lucky enough to escape with a win. Both players missed tactical shots all over the place but the murky course of the game eventually favored me.

Here is the game.

Position 1
Black has been suffering the whole game but now has a chance to live. What do you recommend for black?

With one point more than the followers, Liem entered the decisive game on March 24 with the Hungarian GM with confidence, forcing the No.2 seed to draw after 30 moves.

In the previous two HDBank tournaments, Liem was selected No1 seed, but lost out to his Chinese rivals.

This year he delivered a brilliant performance, including a victory over Zhou Jianchao of China in round 7.

Meanwhile, other Vietnamese hopefuls such as Nguyen Ngoc Truong Son, Nguyen Huynh Minh Huy, Le Tuan Minh, and Nguyen Duc Hoa were ousted from the top ten due to losses in the decisive games.

Lu Shanglei of China came in second with 7 points, followed by Zhou Jianchao of China, Paragua Mark of the Philippines, and Berkes Ferenc of Hungary, who all got 6.5 points.’

Feature Game
GM Papp,Ga won a nice attacking game in the 3rd HD Bank Cup on the way to scoring 5.5/9.

Here is the feature game.

Position 1
Black has been caught in the center. How should white continue?
White to Play

Here is a game in the 2c3 d6 Sicilian. 2…d6 is the Ftacnik repertoire in The Sicilian Defence(Quality Chess 2010).

Cmilyte,V shows how to use RR against a Q in a game from the Turkish League.

Position 1
Black has RR for Q and the c-file. What should black do next?

Position 1
Black has the bishop pair and is harassing Nc7. What should white do now?

Critical Position 1(17.Bd3)
White is threatening Qxh7# How should black defend the kingside? 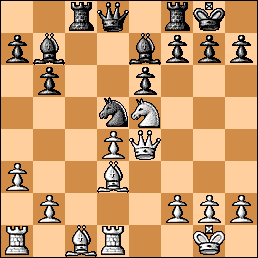 Critical Position 2(24.Rac1)
Black has beaten back the first wave of white’s attempted attack and has sucessfully secured the kingside. Now black is looking for more. How do you continue? Is there a way to press the kingside? Maybe …Nf4 or …g5 perhaps?

Critical Position 3(35.Qc8)
The attack is well under way. How do you play?