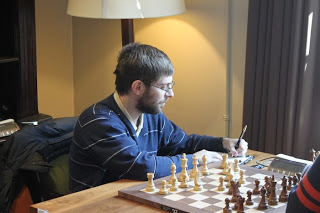 GM Denes Boros, a student at Webster U at the Thanksgiving Open 2012
Photo Saintlouischessclub News
Saint Louis is becoming the chess center of the US as the St Louis CC works with many partners to drive chess growth and interest. Saint Louis CC Partnerships
Community Partnerships
The club is well integrated with the community via numerous partnerships.

Here is a win from Boros.

Critical Position 1
There is an attack in the air on the kingisde where black has just played 17…hg. What do you recommend for white?
-White needs more pieces 18.Ba3 chases off the defending rook
-Bc1 should be on the long diagonal to oppose Bf6 so 18.Bb2 followed by Rad1 and prepare c4-d5. This will also restrain Bb7
-Re1 can do more so 18.Re3-h3 to use the h-file is called for
-Ng5 has lost its usefulness. 18.Ne4 recentralizing and allowing Bh6! to exploit the kingside light squares is better
-Slow builiding with 18.Bd2 and then  Re3 and Rae1 is the way to go. Then white will be ready with sacrificing on e6 or g6 to kill black’s king position
-Something else
White to Play