GM Hoang(HUN) was knocked out in Rd2 by GM Kosintseva,T. 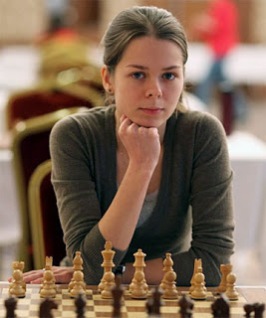 GM Kosintseva,T Bio From Wikipedia Tatiana Kosintseva
‘Along with elder sister Nadezhda, the six-year-old Tatiana became a chess player by virtue of a twist of fate. Wandering home from dance lessons with their mother, the pair happened upon a chess club and decided then and there to take up the game.
Soon after, she became a fearsome competitor at the top level of junior chess, her collection of tournament prizes rivalling even her sister’s haul. At the World Youth Chess Championship, she earned silver medals at the Under-10 (Cala Galdana, 1996) and Under-12 (Cannes, 1997) events. In the Under-10 category of the 1996 European Youth Chess Championship held at Rimavska Sobota she went one better, that time taking home the gold medal. Silver medals were added at the Euro events in Mureck (1998) and Kallithea (2000), at Under-12 and Under-18 levels, respectively.

In 2004 and 2007 Tatiana won the Russian Women’s Chess Championship. Coming close in 2006, the sisters finished a half point behind winner Ekaterina Korbut.

The sisters play side by side in team competitions, most notably at the Chess Olympiad as part of the Russian Women’s national team. Tatiana Kosintseva was also the winner of the 2007 Women’s European Individual Chess Championship.’

Here is the decisive game.

Kosintseva,T (2515) – Hoang Thanh Trang (2470)
French Winawer[C16]
FIDE WCh Women World Cup Khanty-Mansiysk RUS (2.2), 15.11.2012
Black gave the h-pawn for counterplay that never happened and is now facing a bleak future. If white plays too slowly black will have time for ..Na6-c7-b5 targeting white’s queenside pawns.How should white proceed to exploit the extra pawn? This is a test of techique in a sharp ending.