I saved a bad position with a useful draw as Black.

My position was awful and I made is worse with 20..h5(diagram)

White had a think and played the obvious 21.Nxg6! and won a pawn.

Later in the game I was still wriggling around after 32..Rg8(diagram)

White played 33.Re2 giving back two pawns and I was back in the game.

Somehow my luck continued and in the rook ending I stood better after 43.Rh7(diagram)

I should have played 43..Ke5! and Black is winning with the active king and fast a-pawn. Instead I focused on counterplay with 43..a5 and eventually earned a draw.

So there it is. I must study openings, middlegames and endings. 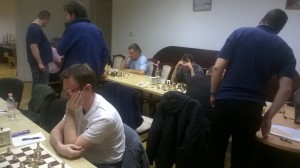 I’m way back on the right

Calm before the storm

Posted on March 17, 2015, in Uncategorized. Bookmark the permalink. Leave a comment.